Uganda facts are among the most intriguing. Read this article to find out some of the most interesting Facts About Uganda that will amaze you. Currently Uganda has Covered a Population of Over 37,873,253 People and the Capital of Uganda is Kampala (land of 7 Hills). The international Language is English and the Biggest Percentage of Religion is Christianity. The Local Currency of this Country is in Ugandan Shillings where you can equate 1 dollar to about 3600 ugandan shillings. Uganda Covers an Area of (mi²): 93065.

Uganda like before have Bordering Countries say, Kenya, South Sudan, Democratic Republic of the Congo, Rwanda and Tanzania. This Country is landlocked (no access to any sea) and what make it a Pearl of Africa its all about the Culture, Demographics, Economics, Geography, Government, History and the Population.

So the Best Amazing and Fascinating Facts about Uganda that You should Know and Have on minds are;

#3 – Almost one-quarter of Uganda’s GDP comes from agriculture. The area is known for its Tea, Tobacco, and Cotton production.

#4 – Though the main export of Uganda is Coffee. So coffee is Usually exported to Developed countries like USA and then it’s sent back (exported) to other countries in Africa.

#5 – Uganda is a landlocked country that is made up of savannas, mountains, and lakes.

#6 – The Half of Amazing endangered Mountain Gorillas have Chose to Stay in the Bwindi Impenetrable National Park and Mgahinga Gorilla National Park all of Uganda.

#7 – The country shares its borders (Boundaries) with five other countries; Rwanda, Tanzania, Kenya, South Sudan, and the Democratic Republic of Congo.

#8 – In terms of population, Uganda is the second largest landlocked country in the world only after Ethiopia.

#9 – A quarter of Uganda’s surface is fond and made up of Lakes and Rivers.

#10 – The Flies called Grasshoppers that they usually pan fry are one of the delicacy consumed in Uganda.

#11 – The Local women of Uganda in Most of the Rural Areas basically Upcountry traditionally do all the Housework and partly have to act in building of homes like collecting mud and Cow dug for the Walls of the House, while men build the roofs of these homes.

#12 – The Climate is very Tropical, and there are two dry seasons that run from December to February and again in June through August.

#13 – English and Swahili are the country’s official languages. Other languages mainly Luganda is one local language that is dominating every where in Uganda with others dialects are spoken throughout Uganda.

#15 – About 36% of Ugandans practice Roman Catholicism, while another 33% are Protestant, the 10% for the Muslims and rest are Non – Traditional.

#16 – Ugandans refer to Most of the Foreigners as “mzungu.” Preferably because of the Light Skin far different from the Black Colour

#18 – Pedestrians do not have the right of way when crossing or walking in streets in Uganda.

#19 – Although you do have to watch for cars, the primary form of transportation for Ugandans are Boda Boda (Taxi Motorcycles.

#20 – Matooke (Plantain) is a staple food in Uganda. It is made with unripened bananas that have been mashed.

#21 – Kitchen Stew and Meat Stew. These are the main dishes that are always prepared all over the country’s local restaurants.

#22 – Malaria carrying mosquitoes can be found in Uganda. They are typically active from 10pm through the midnight to 5 am in the Morning.

#23 – The Ugandan president is always called Museveni. “HE Yoweri Kaguta Museveni” Who has ruled for the last 35 years from 1980’s

#24 – Approximately half of Ugandans live on less than one dollar per day.

#25 – There are an estimated 52 tribes residing in Uganda. These tribes have their own customs that are still practiced to this day.

#28 – Approximately one million tourists come to Uganda every single year.

#29 -Approximately one-third of Ugandans own a mobile phone.

#30 -The country’s most beloved sport is football – or what is known in the U.S. as soccer.

#31 – In terms of land area, Uganda is roughly the size of the state of Oregon. However, Uganda has a population that is roughly ten times larger than Oregon’s!

#32 – Ugandans are known for their warmth and hospitality. In fact, the African Economist called Uganda one of Africa’s friendliest countries.

#34 – The average life expectancy in Uganda is just 55 years.

#35 – It is not uncommon for Ugandans to be late – punctuality is not very important. A person may arrive 30 minutes late, or sometimes even up to two hours after they were supposed to be there.

#36 – Ugandan women are expected to dress modestly and should cover their legs.

#37 – Pointing at a Ugandan with an index finger is an insult. When pointing, the whole arm should be used. This is true of many regions in Africa.

#39 At the height of Uganda’s civil war, nearly two million people were displaced.

#40 The country has won just two gold medals in the Olympics. The first was won in Men’s hurdles in 1972, while the second was won during the 2012 Olympics in Men’s marathon.

#41 The national animal is the Grey Crowned Crane. This bird is featured on the country’s flag.

#42 Lake Victoria is the largest lake in Africa, and it’s located in Uganda. This lake is connected to the Nile River.

#43 Uganda is the second largest producer of bananas in the world, falling second only to India. The country produces an estimated 11 million tons annually.

#44 Public displays of affection are frowned upon by native Ugandans.

#45 About 66% of Ugandans work in the farming industry.

#46 The official nickname of Uganda is “the pearl of Africa.”

#47 A Rolex isn’t a watch in Uganda – it’s a type of fast food. This dish is a chapatti filled with sausage and includes other ingredients like vegetables.

#48 Ugandans are one of the top consumers of alcohol in all of Africa.

#50 Uganda is home to approximately 5,000 chimpanzees – more than any other East African country.

Although it is a landlocked country, Uganda has many large lakes. The south of the country is heavily influenced by one of the world’s biggest lakes, Lake Victoria, which contains many islands. Uganda’s main cities are located in the south, near this lake, including the capital city of Kampala. Besides Lake Victoria there is Lake Albert, Lake Edward, and the smaller Lake George. Lake Kyoga is in the center of the country and is surrounded by extensive marshy areas. Uganda also has 60 protected areas, which includes ten national parks, two of which – Bwindi Impenetrable National Park and Rwenzori Mountains National Park – are UNESCO World Heritage Sites. These areas are home to many endangered species, such as mountain gorillas and hippos, and conservation in Uganda plays a significant role in the country’s political economy, underpinning the tourist industry that accounts for a fifth of the country’s exports. 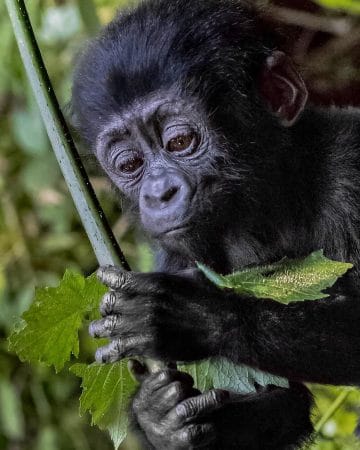