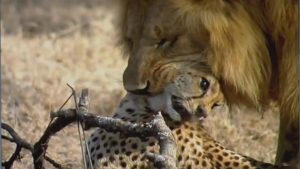 This begs the question: why do lions never eat hyenas, cheetahs, leopards or African wild dogs (whether adults or cubs) after killing them? The answer is: they simply won’t feast on them.

A lion won’t gain much from devouring another carnivore’s flesh, given that cheetahs, leopards, hyenas and African wild dogs aren’t really much of a well-earned meal or a snack craved for – what’s more: their flesh aren’t nutritious and don’t provide the promise of food, no matter how starving the golden cat gets. And so it contents itself with killing that carnivore mercilessly and leaving its uneaten corpse to rot, satisfied that it has just removed another competitor over food and territory or another potential threat to its young.

Also, lions (like most carnivores) don’t eat other carnivores in light of a rule called “The 10 Percent Energy Rule in the food chain”, according to which the higher the trophic level, the lower the energy you get – thus, predators like lions derive more energy by eating herbivores rather than other carnivores; and in some extreme cases, breaking the skin, removing the flesh and digesting it are all energy-consuming, and the meat has to be nutritious enough.
Not to mention that other carnivores tend to have a higher parasite and disease load than herbivores (and I have Rebecca Sealfon to thank for providing this info).

Any animal at the top of the food chain accumulates diseases from all those that they eat. Eating another predator has a much higher survival cost on the evolutionary scale than with eating herbivores whom likely have less disease in general.

Those top predators with a propensity to eat other top predators not only take greater risk of physical harm as well as this disease accumulation. Those that don’t eat them actually survive better and thus get the chance to create the next generation, passing on their genetics and general temperament to their offspring.

_Shared as received from the African Bushwise Class_

Have a great day friends.

Fly into Rwanda Trek Gorillas in Uganda, Save Time & Money