This is said to be the largest national park in uganda covering an area of over 3,800 sq km, though it’s existence is determined by the murchison falls whose rushing water is forced to pass through a narrow gorge something that leaves everyone who has visited wondering.

You’ll see a tower of giraffes, families of elephants, buffalos, lionesses and lions, hippopotamuses, leopard to mention but a few.

Murchison falls national park  is considered to be the heart of the pearl with astonishing wildlife life , the magnificent  Murchison falls , the gentle flowing Albert making  the place an ideal place to be for a perfect safari. It is the biggest Conservation area in Uganda with an area of 3893 square kilometers

The park sits on four districts of Kiryandongo, Masindi, Buliisa and Nwoya. It is found in the Northwestern part of the country and sits on shores of Lake Albert. 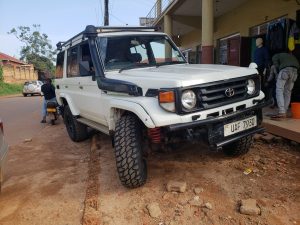 How to get to the park

The park can be accessed through   different routes

From Kampala via Masindi a stopover at Zziwa Rhino Sanctuary before reaching Kafu corner is always on the itinerary when using the route.this is known as the northern route.

From Kampala via Masindi and use Kichumbanyobo gate.this is the southern route.

The park was originally  hunting grounds for the bunyoro kings. This made protection o the wildlife massive because the area could only be accessed by the royal family. When the Europeans came in, they gazetted the place as hunting grounds for the white governors, later it became Bunyoro game reserve and later gazette as a national park in 1952 together with Queen Elizabeth national park.

The park is divided into two parts by river Nile forming the southern bank and northern banks.

Most game drives are in the northern bank with variety of wild animals because of the savannah grassland and widespread porosus  palm trees which makes it ideal for survival of these animals. The park contains geologically the rocky areas on the escarpment and sandy rock free towards the delta.

The park is a habitat for approximately 76 mammals and 451 bird species, the park is one of the few which contains large numbers of animals with elephants as ecosystem engineer. The elephants changed the park’s ecosystem in the early 1950s. the animals include buffaloes, leopards, lions, warthogs, baboons, bushbucks, oribi, spotted hyenas among others. Among the bird species is the endangered shoebill stork at delta of Victoria Nile. Varieties of water birds are spotted along the cruise to the bottom of the falls.

During the visit to the park you cannot miss out on the chimpanzee tracking in the Budongo forest with relatively half of the price they are tracked for in Kibale national park.

Forest walks in the Budongo forest is one of the activities which cannot be left out.

Accessibility in the park

various trails have been developed in the park for example the victoria trial. Wankwar road offering spectacular views of the top of the falls, Chobe road with less traffic,  the ferry crosses from the southern  bank to the northern bank starting at 7am and it crosses respectively at regular time intervals

the Bunyoro trail offers a chance to see view the two magnificent falls in the park…the Uhuru falls and the Murchison. 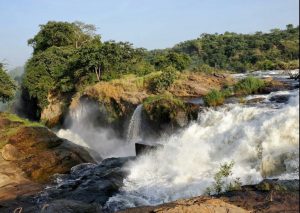 Top of the falls

To access this place, you can go on a cruise till the base of the falls . this cruise is a rewarding one because a variety of animals are seen , the highest concentration of hippos in Africa are known to be along the Nile. Different water birds and ground birds are spotted for example the pied kingfisher, the Nile crocodiles are also seen enjoying the during the cruise. The boat docks on a base rock where the hike to the top of the falls starts. Up the falls you get the clear views of how the mighty waters fixes into a 7 meter narrow gorge to form the Murchison which pours into a 43 meter plunge into the devil’s cauldron.

The park doesn’t operate in isolation it works hand in hand with the local people around the park for the example the Boomu women group who engage in craft work and sell souvenirs to our guests. , the park in the north is surrounded by the Acholi , Langi Alur cultures which when a guest gets encounter with them a lot of memories are created.

On the southern part we have the Banyoro, Bagungu all the stunning experiences with these cultures are worth for the guest.