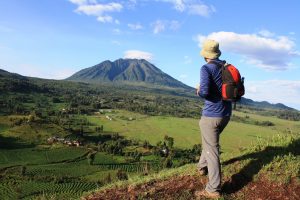 Uganda’s geographical state characterized by beautiful scenic lakes, meandering rivers, glacial mountains & Volcanic Mountains like Mount Muhavura, rolling hills and wide valleys briefly explains its name the pearl of Africa. On several occasions Uganda has challengingly experienced geographers who thought they had travelled the world and seen it all. We cannot escape the fact that Uganda is richly blessed with amazing features when it comes to its landscape scattered with snow-capped mountains, beautiful lakes and dense forests. Talking about mountains, Uganda has the third tallest mountain in East Africa which is Mount Stanley, coming behind mount. Kilimanjaro and mount. Kenya. In addition, it also has some other noble mountains such as Speke, Kiyanja, Elgon, Moroto and so many others. However, mount Stanley being the highest mountain in Uganda doesn’t make it the only spectacular mountain; most assuredly, alongside all those high mountains, there came mount Muhavura, the most wonderfully looking beauty the world has ever got. Mount Muhavura is also known as mount Muhabura. It’s an extinct volcano in the Virunga Mountains on the border between Rwanda and Uganda. Muhavura is the third highest of the eight major mountains of the Virunga mountain range, which is part of the Albertine Rift, the western branch of the Eastern African rift. This mountain Muhavura is partly in the volcanoes national park in Rwanda and partly in the mgahinga gorilla national park in Uganda. It’s an impressive volcano that can be seen from miles around many parts of Uganda and Rwanda because of its high slopes. Its steep slopes are characterized with different vegetation zones, golden monkeys and mountain gorillas enjoying their natural habitats, different climatic zones and a beautiful view of the Crater Lake. Mount Muhabura’s beauty goes beyond the visual one; it also covers the adventurous activities that are engaged in once there. It provides the best hiking experience in Uganda and one of the best in East Africa and of Africa at large. It takes around eight hours for hikers to reach the top of this mountain, having walked through the beautiful terrains which are varied and often like a desert. Once at the top, you are rewarded with clear views of the Virunga volcanoes, Lake Edward, Bwindi impenetrable forest and the peaks of the Rwenzoris. Muhavura open slopes are covered with thick shrubs and thickets which are broad spinned plants looking like Yucca. You walk through muddy and slippery grounds as it rains on and off, and as you get to the summit, you meet small crater ponds. You also encounter swamps in the saddles of the volcanoes that retain water all year throughout. Truthfully, the beauty of mount Muhavura is a worthwhile visit.

Most specific facts about Spotted Hyenas in Africa