Low Season Gorilla Permits in Rwanda. Till date, gorilla tourism remains the backbone of Rwanda’s tourism and conservation sector. Flocks of tourists come to the country to also have lifetime chances to trek the gorillas in their natural habitats. An activity that brings one so close, on foot to the wild beasts that are so endangered. 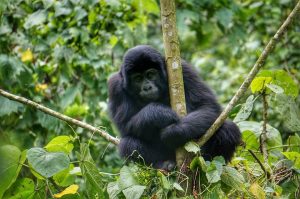 Despite Rwanda’s gorilla permit almost doubling Uganda and DR Congo’s gorilla permits, nothing stops travelers when the experience is so thrilling.
One minute you are walking through the bamboo thickets in Rwanda’s Volcano national park, pushing up a steep lava slope. The next moment, you turn in a corner with sunlight streams through the forest canopy. The experience is simply worth every penny.

In the urge to encourage more gorilla tours in Rwanda, RDB has introduced 30% discount on gorilla permits during the low season of April, May, October and November. This implies that trekkers will have to pay 1050 USD. However, the discount is to only be given to those visitors that are to spend at least 3 days in Rwanda and also visit the other two national parks of Akagera national park and Nyungwe forest national park. Undeniably, this strategy has brought back more safaris in Rwanda, and not only
gorilla trips, but also wildlife and cultural tours in Rwanda.

Gorilla permits in Rwanda were increased with the major aim to turn Rwanda into a luxury destination offering mostly first class services to its visitors. There was also a need to increase on the money that was given back to the neighboring communities and more funds to finance the conservation projects that ensure the safety and wellbeing of the great apes.
Also the rise in the gorilla permit fees was to reduce on the number of trekkers that visited the gorillas in a day. So to spend an hour with the gorillas in Rwanda during the high season, travelers pay 1500 USD
for the permit, which without no one is allowed to trek the gorillas.

Gorilla trekking in Rwanda is done in Volcanoes national park, a park so rich in diversity and located in the Virunga chain of mountains. The park’s less foliage makes visibility and photography more enjoyable. Take as many pictures as you want during the magical hour with the mighty giants of the
forest provided the camera doesn’t have a flash.

Alternatively, Gorilla trekking can also be done in Uganda’s Bwindi impenetrable forest national park and Mgahinga national park, both located in the Virunga series of Volcanoes that are shared by three
countries of Uganda, Rwanda and DR Congo. Gorilla permits in Uganda are at 600 USD, a price that is almost half of the gorilla permit in Rwanda.
Still gorilla trekking can be done in Virunga national park located in eastern DR Congo. Though currently trekking the gorillas was suspended in the park due to the political unrests that caused several murder cases of the park rangers. But when it resumes, when the park security is more tightened and the safety of both the gorillas and trekkers ensured, it will be the time to book your gorilla safari in DR Congo. A
permit costs 450 USD.

If it’s a safari, let it be the one in Africa’s gorilla destinations. And if you ever wanted to visit Rwanda and felt like the destination was too luxury, wait for the low season and enjoy the 30% off discount.

The Best Hide Out Accommodations in Pictures found in different regions of Uganda.

Uganda Among the Top Tourists Destination Cool list for 2019 & 2020