Facts about an African Elephant

African Elephant. The word “elephant” comes from the Greek word “elephas” which means “ivory”. Newborn elephants have little control over their trunks and must constantly learn how to use them.

This complex skill is mastered through practice by exploring their environment – touching fellow herd members, their surroundings and themselves. With more than 50,000 individual muscle units in the trunk, with this calves must then master the use of their trunks for feeding. This activity is done by elephants of all ages usually when they are feeling nervous or unsure. Sometimes an elephant that appears to be sucking its trunk is actually using it to smell, placing the tip inside its mouth after touching or sniffing dung or urine to assess pheromones produced by other elephants. 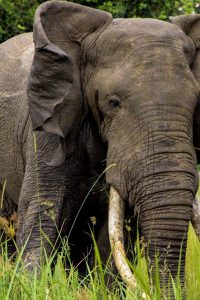 Here are some fascinating Facts about African Elephant

An Elephant lives up to 70 years in the wild the African bush elephants are not only the largest elephants but the largest land animals in the world, weighing up to 6000 kg and 3.2m tall, while females are about 60 cm shorter and half the weight. Asian elephants have a shorter lifespan of around 48 years, male Asian elephants weigh roughly 4000 kg with a shoulder height of 2.75m, while the 2000kg, 2.2m tall African forest elephant is the smallest elephant species. 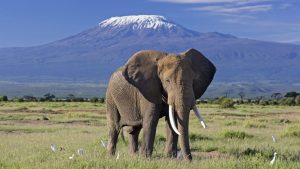 Elephants have highly developed brains, not to mention the largest in the entire animal kingdom. Their brain is 3 or 4 times larger than that of humans, although it is smaller in proportion to their enormous body weight.

Research has shown that Elephants communicate over long distances using a subsonic rumble that can travel over the ground faster than sound through air. Other Elephants receive these messages through their feet and trunks. Scientists believe that this is how potential mates and social groups communicate with each other.

Elephants are herbivores and need to consume 300-400 pounds of food per day. In additions to grasses, leaves, bamboo, bark and roots, they also known to eat crops like banana, sugarcane and– the African Elephant’s favorite– sweet marula fruit. More to them eating massive amounts of food, adult Elephants drink 30-50 gallons of water every day.

They use their trunks like a massive straw to suck the water up, but then they actually squirt it into their mouths to swallow it. During the dry season they’ll dig to find water, making huge holes in seemingly dry stream beds with their feet, trunks, and tusks until they reach the water supply. In this way, they also create watering holes for other animals to drink from. They produce a lot of methane gas as a by-product of digestion. Scientists estimate that the amount of methane they emit in one day would be enough to power a car for 32km.

In addition to smelling, trumpeting, drinking and grabbing things, Elephants can use their trunks to breathe (like a snorkel) in deep water. In this way, they can swim fairly long distances.

Elephant skin is over an inch thick. But because it’s loaded with nerve endings, their skin is also highly sensitive. Elephants from the same herd will often use touch to greet each other, either wrapping their trunks around each other or giving each other friendly “hello” taps on the body.
Tusks are hugely elongated upper incisor teeth embedded deep in the elephant’s head (up to a third of a tusk is hidden from view).

Elephant tusks have a variety of uses: as a tool to dig for food or water and to strip bark from trees; as a weapon in battles with rivals; and as a courtship aid – the larger his tusks, the more attractive a male elephant may appear to a female.

The elephant’s gestation period is 22 months – longer than any other land animal in the world. A new born human baby weighs an average of 7 pounds while a newborn elephant baby can weigh up to 260 pounds! The baby can stand up shortly after being born.