Things to know about the Secretary Bird

Unlike most birds of prey, the secretary bird is largely terrestrial, hunting its prey on foot. Adults hunt in pairs and sometimes as loose familial flocks, stalking through the habitat with long strides.

Prey may consist of insects, mammals ranging in size from mice to hares and mongoose, crabs, lizards, snakes, tortoises, small birds, bird eggs, and sometimes dead animals killed in grass or bush fires. Larger herbivores are not generally hunted, although there are some reports of secretary birds killing young gazelles and cheetah cubs. The importance of snakes in the diet has been exaggerated in the past, although they can be locally important and venomous species such as adders and cobras are regularly among the types of snake preyed upon. 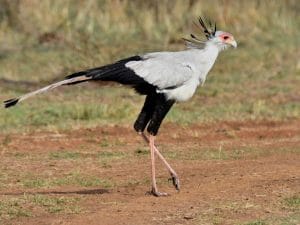 Prey is often flushed out of tall grass by the birds stomping on the surrounding vegetation. It also waits near fires, eating anything it can that is trying to escape. They can either catch prey by chasing it and striking with the bill and swallowing (usually with small prey), or stamping on prey until it is rendered stunned or unconscious enough to swallow.

Larger or dangerous prey, such as venomous snakes, are instead stunned or killed by the bird jumping onto their backs, at which point they will try to snap their necks or backs. There are some reports that, when capturing snakes, the secretary birds will take flight with their prey and then drop them to their death, although this has not been verified. Even with larger prey, food is generally swallowed whole through the birds’ considerable gape. Occasionally, like other raptors, they will tear apart prey with their feet before consuming it.

Young are fed liquefied and regurgitated insects directly by the male or female parent and are eventually weaned to small mammals and reptile fragments regurgitated onto the nest itself. The above foodstuffs are originally stored in the crop of the adults.

The secretary bird has a relatively short digestive tract in comparison to other large African birds such as the kori bustard. As the foregut is specialized for digesting large amounts of meat in a short amount of time, there is little need for the physical breakdown of food within the digestive tract over extended time spans. The crop of the secretary bird is dilated and the gizzard is non muscular in comparison to other birds. The large intestine lacks a cecum as there is little need for fermentative digestion of plant material.

Captive secretary bird with two eggs in its nest.

Secretary Birds associate in monogamous pairs. During courtship, they exhibit a nuptial display by soaring high with undulating flight patterns and calling with guttural croaking. Males and females can also perform a grounded display by chasing each other with their wings up and back, much like the way they chase prey. They usually mate on the ground, although some do so in Acacia trees. Secretary Birds will stay close to their mate even if their chick has already left.

Both the male and female visit the nest site for almost half a year before egg laying takes place. The nest is around 2.5 m (eight feet) wide and 30 cm (one foot) deep, and is constructed as a relatively flat basin of sticks.

These eggs are incubated primarily by the female for 45 days until they hatch.

The secretary birds are facultatively fratricidal. There are conflicting opinions on this phenomenon also called cainism—”No evidence [exists] of sibling aggression, but youngest in brood of 3 almost always dies of starvation…”

The downy young can feed autonomously after 40 days, although the parents still feed the young after that time.

Both the parents feed the young. At 60 days, the young start to flap their wings, and by day 65–80 are able to fledge. Fledgling is accomplished by jumping out of the nest or using a semi-controlled fall via fervent wing flapping to the ground. After this time, the young are quickly taught how to hunt through expeditions with their parents and are considered independent soon after.

Secretary Birds have unusually long legs (nearly twice as long as other ground birds of the same body mass), which is thought to be an adaptation for the bird’s unique stomping/striking hunting method. However, these long limbs appear to also lower its running efficie. Nice lunch 🥗 too