Forgetting the Bujagali Falls on River Nile, A Uganda safari is now synonymous with gorilla trekking in Bwindi impenetrable forest national park or Mgahinga National park. The country is most famous for seeing the endangered primates; the mountain gorilla and chimpanzees. 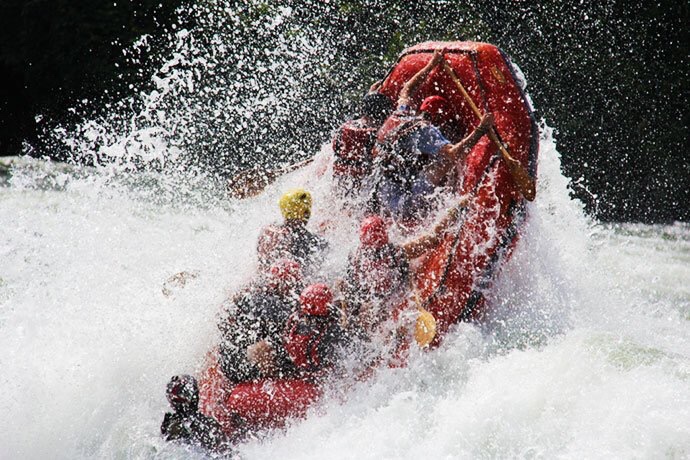 Though Uganda waterfalls are not so common, and on the mention of falls in Uganda, almost all travelers only think of Murchison Falls, which is probably the most powerful waterfall in the world. Tourists love seeing how huge masses of water forces itself down in to a narrow gorge, forming a rainbow above it.

However, talking about waterfalls in Uganda, the country can easily be called a waterfall country with numerous small waterfalls hidden in the deep jungles and mountains of Uganda. But still Bujagali falls on River Nile is one of the dominant falls that can’t be left out on the mention of Uganda waterfalls.

Though a Hydroelectric Power dam was now constructed on Bujagali falls in the urge to increase on power accessibility in Uganda, it is still one of the most beautiful places that any traveler can ever go to while on a safari in Jinja town.

Bujagali waterfall is commonly known as Budhagali falls by the Basoga in Jinja, the dominant ethnic group in the area. The falls still bring out Uganda’s striking beauty of its nature, its is a particularly amazing section of the upper Nile.

Because of the dam, Bujagali falls might not be as high as it used to be, and the force at which the water hit from the risen rock somehow reduced, but still the place is still simply beautiful to behold. Located just a few kilometers from Jinja town and the Kampala Highway, this water location furnishes several opportunities for Kayaking, white water rafting, bungee jumping and so many others.

Visitors to Bujagali falls are welcomed with a tale from a local guide about the falls. The name Bujagali derives from the Bachwezi spiritual leader called Mandwa Budhagali who lived and worshipped his spirits near the falls. After Budhagali’s death in the 1970s, his son succeeded him, and he is now over 80 years but still maintaining his spiritual status till present.

From far back, Bujagali has been a very important spiritual place by the people living in the area. Being named after a river spirit that was called Budhagali, the spirit has manifested itself in more than 30 human spiritual leaders. And whoever is to become the new spiritual leader, he proves himself by floating across the river on just a piece of backcloth to prove him supernatural powers. If that person succeeds, he is claimed the new spiritual leader with the title “Mandwa Budhagali” This ceremony takes place in the presence of chiefs, other spiritual leaders as well as the residents.

In November 2011, Bujagali falls submerged, it’s now the Bujagali Lake. After the completion of the dam construction, Bujagali dam filled to its new levels of about 2000 meters above the sea level. The raging power along the Upper Nile was diverted into the hydro-electric Turbines.

If anywhere in Uganda, and you find yourself in Jinja, Bujagali Lake is a place not to miss. It is just about a two hours’ drive from Kampala capital city. About accommodation for trotters wishing to spend a night in Jinja, hotels from luxury, midrange and budget are all available. Consider the Living waters Resort, Cool breeze hotel Jinja, source of the smile hotel, Signature Hotel apartments and so many others. Visiting the Bujagali lake won’t fail you.