The Immense Beauty of Uganda’s Lakes

With the immense beauty of Uganda’s Lakes, Most people think of Africa as dry dusty plains with hungry children. Fine it might be the case in some countries, but Uganda doesn’t exactly suffer from a lack of rainfall and is awash with lakes some of which were formed when running lava from active volcanoes back in the time blocked the courses of
rivers whilst others. 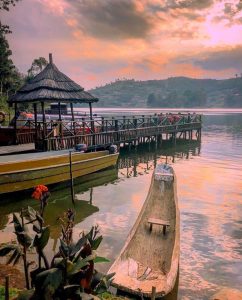 It is believed by some Ugandans that these lakes were created by the gods.

Some lakes are part of the chain lakes in the Albertine Rift (the western branch of the East African Rift) that were formed as a result of ongoing tectonic movement that is gradually splitting the Somali plate away from the rest of the African continent. Perhaps sometime, it will eventually form a new smaller African continent split from the mainland Africa.

The fact that the Uganda is the pearl of Africa;

Uganda is located in the great lakes basin and it is around the tropical equatorial region of Africa, crossed with the Great Rift Valley escarpment is a very crucial geographical position making it truthfully a well watered country.

Nearly one fifth of its total area is open water or swampland.  Four of East Africa’s Great Lakes–Lake Victoria, Lake Kyoga, Lake Albert, and Lake Edward–lie within Uganda or on its borders.

Lake Victoria dominates the southeastern corner of the nation,

with almost one-half of its 10,200- square-kilometer area lying inside Uganda’s territory.  It is the Africa’s largest freshwater lake feeding the upper waters of the Nile River, which is referred to in this region as the Victoria Nile. Several launch cruises go on all year round on the Victoria Lake, both lake transfers and Lake Kyoga and the surrounding basin dominate central Uganda.

These “finger lakes” are surrounded by swampland during rainy
seasons. All lakes in the Lake Kyoga Basin are shallow, usually reaching a depth of only eight or nine meters, and Lake Opeta forms a separate lake during dry seasons. Along the border with Zaire, Lake Albert, Lake Edward, and Lake George occupy troughs in the western Rift Valley. Lake Bunyonyi the place of many little birds is also a home to twenty nine islands. Not forgetting the crater lake region, a crater trail with about 86 crater lakes and explosion craters like the Ndali kasenda crater lakes, these just simply create a breathtaking scenery in western Uganda surrounded by the great Virunga and Rwenzori mountains of the moon ranges.

Lakes in Uganda provide not only tourist attractions but also provide a living for many people who live on their shores for fishing and other pursuits.

Most of them have boat trips which can be undertaken without great expense and the best have island resorts on them where you can feast on a better expected meal. Honestly there is a lot that you can do whilst Uganda’s lakes, sport fishing, bird watching, boat trips and some of them landing on different islands on the lakes, swimming, nature walks
and so many others.

Certainly and most assuredly, Uganda is the country you should be chasing by now, it has all that you would need to see and do. For a traveler, Uganda is one of the most recommendable countries when it comes to fresh water lakes with a total of 23 lakes. When it comes to lakes, Uganda can never disappoint you.