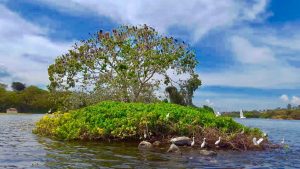 Source of the Nile in Jinja Uganda

Source of the Nile in Jinja Uganda; The birthplace of the mighty Nile River (or one of them anyway…), here the water spills out of Lake Victoria on its journey to the Mediterranean flowing fast from the get-go. It’s estimated no more than 5% of water here will end up in Egypt.

Jinja is famous for the historic Source of the Nile (White Nile) and also called the adrenaline hotspot of East Africa because of the many white water activities like rafting. A great way to experience the Nile in a more relaxing way is by private boat.

You will spot many birds and you’re able to see the real Start of the White River Nile. It’s a very small (touristic) spot on the river where you can jump off the boat and walk over a wooden deck towards the blue iron ‘source of the Nile’ sign to make a quick photo.

That’s the point where the longest River in the world begins to flow from Lake Victoria to the Mediterranean Sea through Egypt and Sudan.

Did you know it takes the water 3 months to complete this journey?

There’s a landmark identifying the source and a few restaurants and bars, which can make for a nice place for a sunset beer. Exploring the source by boat (per person USh50,000) is another popular option.

Despite being touted as one of Jinja’s premier drawcards, on the Jinja side of the river there really isn’t much to see. It’s more pleasant across the river on the western bank with the Source of the Nile Gardens and Speke Monument – a pillar commemorating where the British explorer first laid claim to the historic source of the Nile in 1858. In recent times the source has been traced anywhere from Rwanda to Burundi.